Here at Rain Delay Games, time is fleeting. I mean, I guess it's fleeting everywhere but, for my specific situation, we're very much getting to the point when I'm going to have to make a decision on how much further I want to spend full-time (and no-paycheck) effort on this whole thing. I've given myself until the end of the year to fully focus on RDG projects but the days and weeks surrounding the holidays have a way of making that time disappear. As such, I've come up with a plan for the remainder of year and something to shoot for at the end.

In an effort to not bury what was clearly the most important thing I did in Sprint #16, Ensue will no longer carry that moniker. Henceforth, you are playing Switch Hitter. 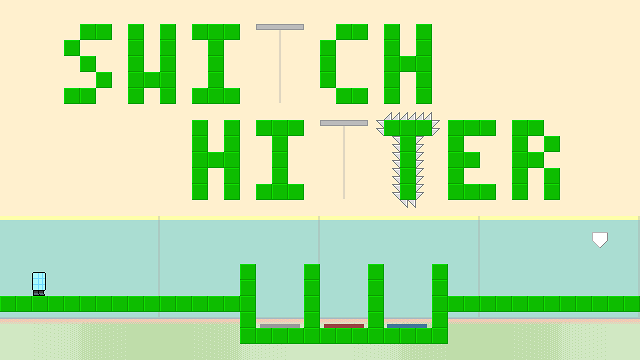 I made a list of at least fifty name ideas, most of which were utter garbage, but Switch Hitter is the one that I kept coming back to. I loved the combination of it being descriptive of a big mechanic that the game will use (i.e. hitting switches to affect something else within the level) and being what you call a baseball player who can swing the bat both left-handed and right-handed.

Less important to you but meaningful to me, I'm no longer going to be referring to this whole thing as a "prototype". I think we're clearly beyond the prototyping phase--and probably have been for a while--so I think it's a good time to stop using that phrase.

For the past several years, I've made the trip to Awesome Games Done Quick to be with my speedrunner buddies (shout-outs to the Yoshi's Island community). The event always happens in early January, which will be very convenient for me this year as I consider wrapping on Switch Hitter. I've decided that, by the time AGDQ rolls around, I need to have a not-obviously-unfinished version of the game to take to the event and get feedback from, frankly, anyone who'll play it there.

In recent days, I've been very significantly doubting whether this game is actually any fun to play. I mean, I have fun playing some of the insanely hard levels I make but it's not clear to me that others do. I've committed myself mentally to the idea that if, between now and AGDQ, people just don't really seem to like this game all that much, it'll be time to release whatever I have and move on to a different project (along with, almost certainly, finding a new day job). After all, if it's not fun, what's the point?

I have several things that need to get done before I consider Switch Hitter AGDQ-ready, though. The first was, you know, giving it a real name. Check!

The second, third, and fourth things are that I feel like this game needs three worlds by January: a world that establishes the basic platforming mechanics, a world that goes a little further with the platform and establishes the projectile mechanics, and then a world that mixes them all together. It's less about making it feel like the game has structure and more about making sure that I'm introducing all that the game has to offer in a reasonable way. I don't need the worlds to be super-polished but I do need them to be assembled.

During Sprint #16, I was able to, for the most part, get World 1 assembled, and you can play it right now. It's not very challenging (which is the point) but I think it does a much better job of introducing switches and the basic jump mechanics that the game uses. My hope is that, within a few weeks, I'll have Worlds 2 and 3 in a reasonable spot as well.

Finally, I think an AGDQ-ready build needs to have at least some sound effects and some music. During the development of Deleveled for the Seattle Indies Game Jam, I learned first hand just how much some simple sounds can add to how a game feels. Despite having absolutely no background in creating my own sound effects, I'd, nevertheless, like to give it a try. I'm prepared, however, to just use Freesound again if I end up not liking what I'm able to make myself.

I've all but decided that Switch Hitter will be ditching the balls and strikes mechanic for AGDQ. I may end up keeping the whole "three strikes and you're out" thing but the concept of having to collect four balls to reset your strikes is just too confusing and too pointless for me to want to continue pursuing it. It's a real blow to my perception of the game because I feel like that unusual take on a platformer health system was really the only original contribution Switch Hitter was making to the genre. Alas, if it's not fun--or, unfortunately, if I just can't figure out how to design around it to make it fun--I can't keep forcing the issue. The AGDQ-ready release will not be featuring balls and may very well not feature strikes either.

One thing that I totally forgot to mention in last sprint's post is that I've added smoke trails to enemies when they get launched by the bat and to the hero when a triple jump is executed.

Besides adding a bit of visual flavor to the game, I'm hoping that the triple jump trails will help emphasize to a new player that something different is happening when you time three jumps in a row. The height boost you get is certainly not obvious so that's what's motivating looking for other ways to communicate the triple jump's effect to the player.

I'm not sure I have many closing thoughts for this sprint. It was a ton of rapid-fire level design--I'm now sitting on over a hundred very short levels--and a dash of soul-searching, trying to figure out what I really want to accomplish with this project in the near term. I'm certainly to the point where I'd love if I could somehow carve out a career as an independent video game developer but, I mean, I'm still a long way from being able to do that.

Thanksgiving will cut into Sprint #17 a bit so I've decided to halt original development and try to focus purely on getting Worlds 2 and 3 out there, if in a rough format. I surely have enough levels to draw from but I'm also willing to create new ones as needed. Two weeks from today, I hope to be able to show you all 81 levels I intend to take with me to AGDQ.